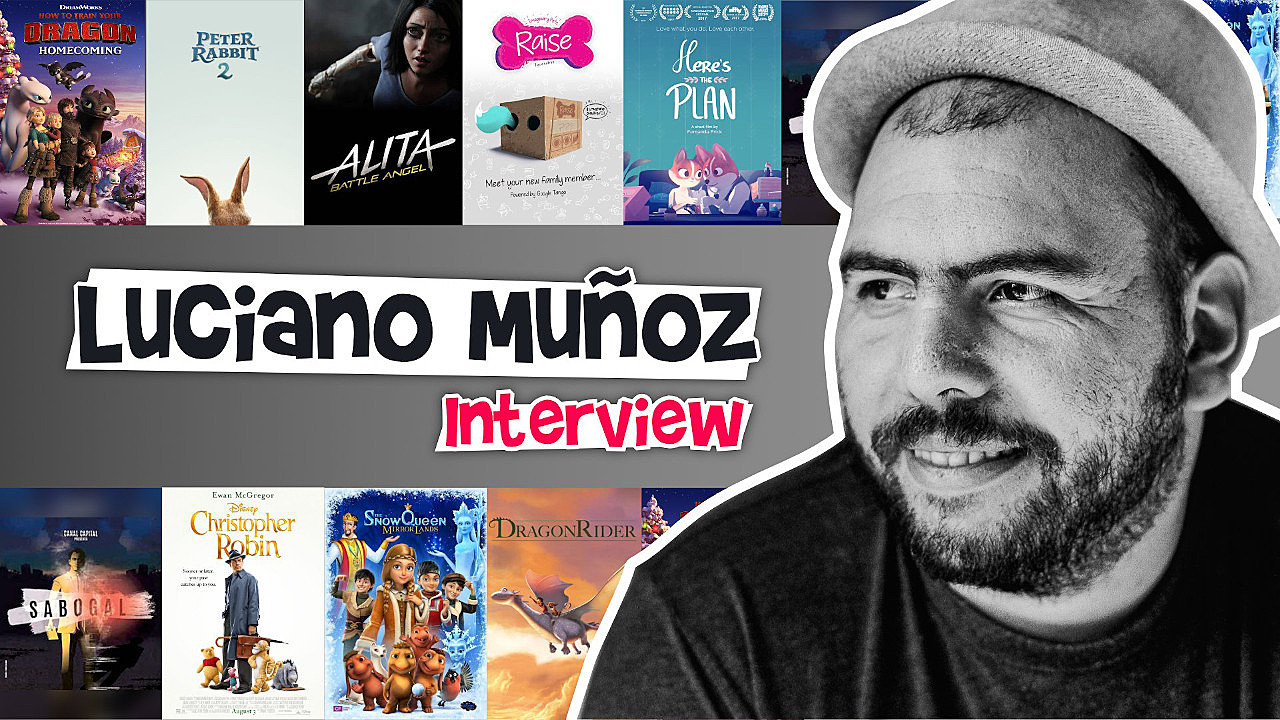 Normally, we conduct artist interviews over email. However, when I learned that Blender artist Luciano Muñoz (aka Looch) was in my city working for Animal Logic, I saw an opportunity that doesn’t arise all that often. So one sunny day in Sydney, Looch and I sat down face to face, shared a meal, and had a wonderful chat.

Here is a selection of highlights from our broad and interesting conversation. Enjoy!

“When I was a kid I remember I told my Mum that I really wanted to do a job where I could travel and I found it!”

Looch certainly wasn’t lying, this native Chilean was in Australia working as an animator on the feature film ‘Peter Rabbit 2’. In fact, Looch has spent most of his adult life either trotting all over the globe working as an animator or trying to better his skills by learning at many institutions around the world. Some of those places include London, Czech Republic, Bulgaria, Belgium, Spain, Peru, and Australia (obviously). His growing list of film credits includes Christopher Robin, Alita: Battle Angel, Detective Pikachu, Dragon Rider, How To Train Your Dragon: Homecoming, Peter Rabbit 2, and Snow Queen.

You Gotta Have Grit

Looch’s first professional learning was an “Audio Visual Communication” degree. This was a 4 film and tv course in Chile, however, in his 3rd year there was a 3D animation class which got him really excited but spots got booked pretty quickly he actually missed out. But that wasn’t going to stop someone with as much determination as Looch.

He found that there was a 3DS Max class that some guy was running on a Saturday in an internet cafe and he was there in a heartbeat. This inspired him to do more research and became interested in VFX as well as character animation.

“Back home it’s basically impossible to dream of a film career.”

Looch had his target set to learn at the Vancouver Film School but the program he was interested in was way too much money ($50K plus expenses). So he continued taking the 3-hour Saturday class as well as studying on his own, learning anything he could find a tutorial on. It didn’t matter what software it was, he practiced them all.

He found a program that was focused on character animation and was also way cheaper ($17k). On top of that, that year the school was giving scholarships, so he applied and got it. So he did end up going to Vancouver Film School after all!

When did Blender come into the Picture?

Because it’s compulsory to ask any Blender artist, what was the first version of Blender Looch used? 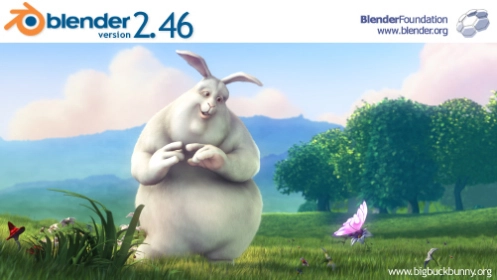 He only really got hooked thanks to Bassam Kurdali during a TOSMI course that he attended in Bulgaria.  That was Blender 2.49 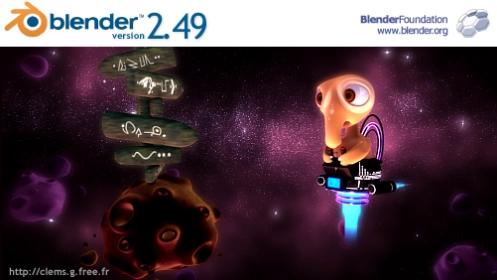 The Pursuit of Learning

I asked Looch how he thinks about learning and why I always see him on Twitter posting about some course he is taking.

“Paying money for courses is an investment in yourself...

YouTube learning works mostly for little things, you know, when you try to find how to do that specific thing.  But when you want to learn something that is more broad, you need structure.  Which you can rarely find online unless you take a proper course.  So you need time and money to learn it.”

Looch has learned a lot from CGCookie in the past...

“I remember taking the Piero Course and I loved it because it was so well organised!”

His Adventures at Pepe School Land

I noticed a substantial increase in Luciano’s skills after he attended Daniel M Lara’s animation school, Pepe School Land. So I asked him to speak about his experience there.

“I went back to Chile and I started an acting shot. After a month of trying, I was like...I need to do a course, so I went to Pepe School Land.  This is Film School but with animation.  The focus is on storytelling and understanding the process of storytelling.”

One thing he never was taught how to do in all the courses he has taken up to then was “how to see”.  Pepe School Land (PSL) was the first time he saw somebody teaching “where and what to look at” to learn to improve.

Wayne Dixon: Do you know what the first lesson of the Animation Bootcamp is?

Looch had a plan for his time at PSL. He approached every shot like it was a real piece. He tried to do as much work as he could and rendered it as beautifully as he could too. So at the end of the class, he would end up with a new reel that could land him a job (and it did).

Getting Feedback at Animation School

Looch mentioned the term “Feedback Junkies”, so I asked him to elaborate:

“Feedback junkies'' was a term that Daniel used, referring to the students who ended up completely reliant on feedback because they didn’t know how to see.  When they did something they relied on other people’s eyes to do the work, rather than learning to see and using this feedback to plus the work.

Getting Feedback Outside of Animation School

“When you get feedback, it needs to be addressed on your skill level, what stage you are in, and on everything that is related to that particular piece.  If I ask you for feedback today and you give me great feedback and tomorrow I ask another colleague for feedback...and he gives me completely different feedback.  The idea is that you can use your favourite [feedback] that works for the idea”

“Sometimes I would get to the polish stage and people would give me feedback on the idea which is a note that can only be addressed in the blocking stage....feedback needs to be focussed on the stage you are in.”

Tips when asking for feedback

“When I ask for feedback on a personal project - I say “this is where I’m at” to focus the type of feedback I’m after.  I try to focus the feedback because it can sometimes be too much noise and you end up giving up”

Who do you ask for feedback?

“I have a set of people that I send my stuff to, I have particular people for particular things.  I have good friends that are good at story more so than polishing, so I ask them for feedback on that regard.”

Wayne Dixon: Even though you’re working in the feature film industry, I saw on twitter recently that you were doubting your skills. So what makes you feel like your skills haven’t arrived?

Looch: I think I’ll never arrive. I always feel like my skills are lagging behind.

Every time I get to a new studio I’m so nervous. I think my shots are sh*t, my life is sh*t and I’m going to go home.  And then someone [there] is like,  “I feel exactly the same way”.

No!? But you’re amazing. (he pretends to be the other person)

No, you’re amazing (he chuckles)

Every artist has self-doubt.  That is normal.

One of the things that I love about Looch is that he is always doodling and creating little animation tests.  It seems like if he’s not working, he’s working on something.  Here’s a few examples of what I mean.

He was going through old projects and trying to see if there was anything interesting to work on, he found the pig. Started adding things. He took the Malcolm rig in Maya and cut off his arm (used rigify) and just started developing the idea.  Check out his instagram for more versions.

He was inspired by ‘Spider-Man: Into the Spider-Verse’ so he downloaded a model from Sketch Fab, rigged it with rigify. And animated a shot for fun.

Looch needed something to play and was looking at the free-body mechanics rigs that Ugur Uliv Yetiskin released for Maya under the MIT license.  He thought they were a great design but a little ugly, but it turns out it was just the viewport shaders in Maya.  He rigged them with rigidify and now sells them, and other assets on his Gumroad account, here.

Blender in the Industry

I asked Looch about how Blender is used at large film studios, do they know about it? What’s the perception etc.

“People know about it and are interested in it, but mostly the people who use it don’t bang on about it. It’s just a tool in their workflow.”

The best use he has seen Blender used for was to sell an idea to a director.  The animator used Grease Pencil to block out the animation of cloth because they could quickly draw it in 3d space.

Looch said that the pros and cons of broad versus narrow skills depend on where you are working.  He was in a small place with 2 animators.

He knew a bit of rigging and animation, and even though the other guy wasn’t really that great at animation, that was the only thing he knew how to do.  So he got to do all the animation work. “I was so pissed off” he chuckled.

So would you suggest people specialize or generalize?

“It depends on what the person really wants to do.  But at the beginning, maybe be more generalist. Because that opens up more options for work but always be very skillful at 1 thing at least.  So if you are a generalist who is also an animator you can enter as a generalist and then also work on animation. At a big studio, you are hired for 1 task and that is the only task you do.  You are never going to touch anything else”

Getting into Feature Films

“I feel like I’ve been super lucky career-wise. I never win money, I never win anything that’s a contest, but career-wise I get lucky so often.  I have no idea why.”

So what gets you in the door of a studio, is it your reel?

“The first thing is your reel.  But a reel is a reel. it doesn't need to be the best reel, but it needs to be good.  The second thing is networking.  People are going to vouch for if you’ve worked with them if you’re good and you have trust.”

It seems like everywhere you go you make friends.

“Well you have to, otherwise you are going to be alone!”, he laughs. “My personality is the kind that looks for connection, but on the other hand I think it’s really important in the industry, like no matter what level or department or what area it’s an industry that is moving, you move to a new company and you are going to find them again.  When I got to Animal Logic here in Australia, there was already 7 people I knew that were here.”

So what about learning other software?

“Pepe School Land teaches Maya and Blender, and pushes you to do both.

What’s He Up to Now?

At the time of writing, the world is in the middle of a Coronavirus Pandemic, but Looch is currently working remotely on a ‘really cool feature film’ for DNEG in London.  (He’s not legally allowed to mention any more than that)

Looch also has a solid plan to reach his ultimate goal of working for Pixar.

One thing’s for sure, this guy’s got grit, passion, and the drive.  He’ll get there.

Where are the best places people can connect with Luciano Muñoz?